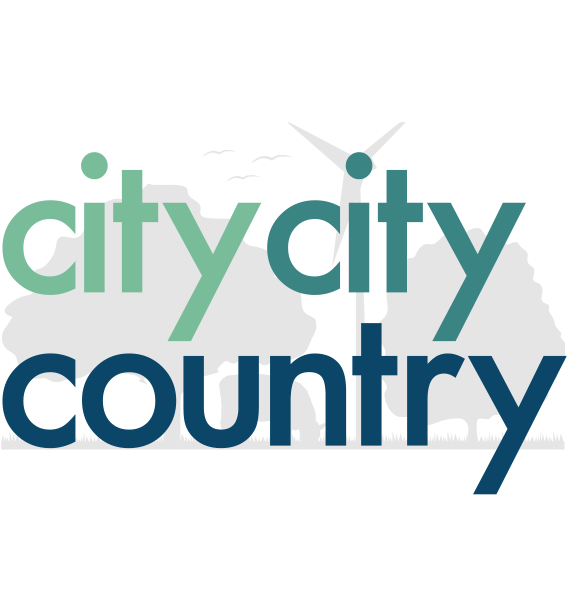 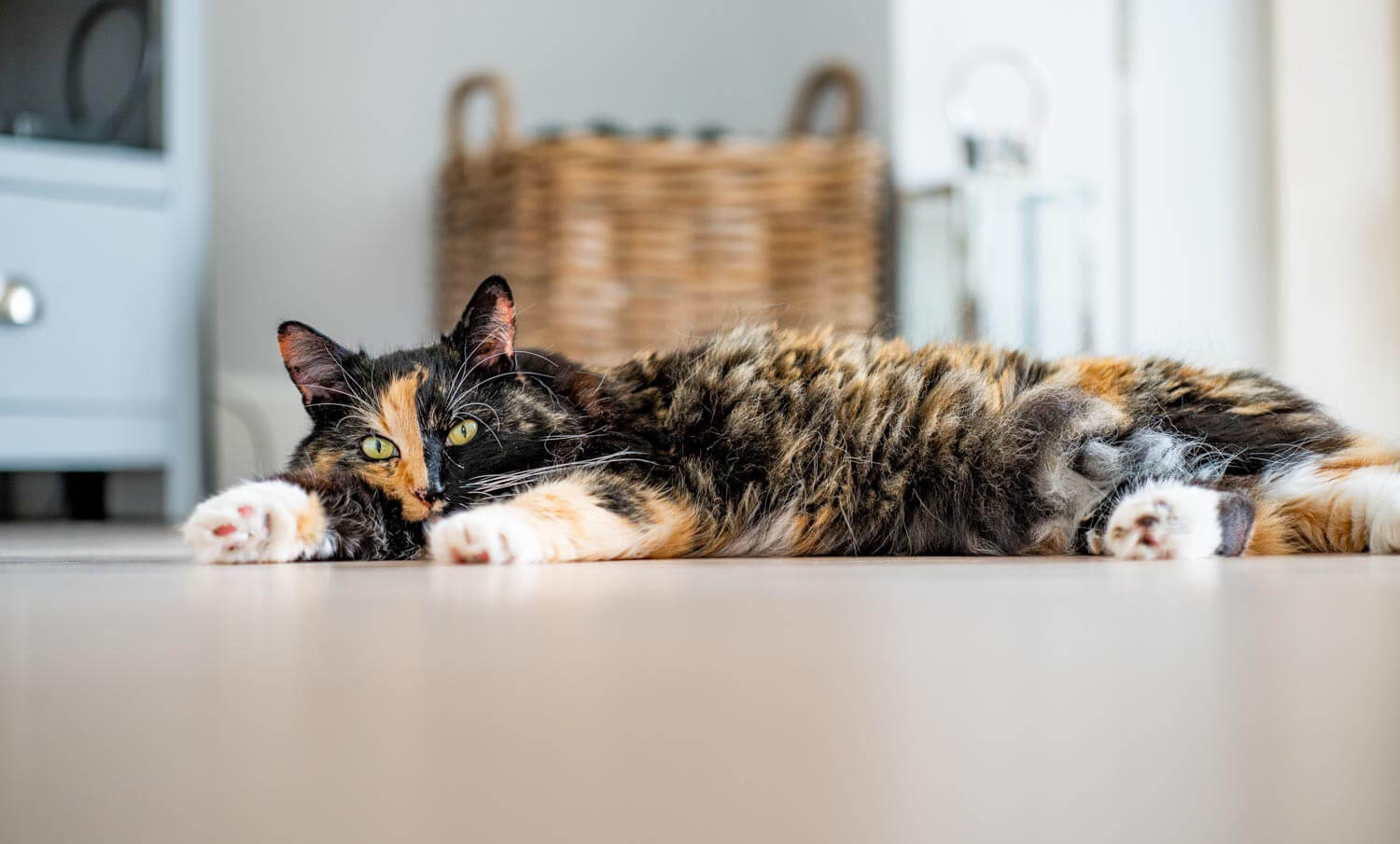 I have always loved cats. I grew up with them in my childhood home. They flock(ed) to me, much to the chagrin of my family members; forced to pry me away from flea-ridden, rough looking street-cats in various countries. Claire is a self-professed dog person, but a cat is still better than no animal at all.

Living in London and working full time had us fantasising about getting a pet for many years before we felt we could take the plunge. The first year of being together, we still lived apart. When we did move in together (I moved in), to an “executive starter” one-bedroom flat in the up-and-coming (rough) part of town, it wasn’t impossible to have a cat; but less than ideal. Claire did have a cat there (Martha), whom sadly (and bizarrely) passed away the day we got together. Some might say I filled a cat-shaped void in Claire’s heart.

The thing is, we knew we wanted to find a bigger home and we didn’t want an inside-only cat. We looked at cats with FIV (the cat version of HIV), who do have to stay inside, but we decided to wait until we had found a new place.

As you will see from many other posts here, we did find another place to live (or rather, renovate).

For a year or so while renovating, our evenings were spent looking at cats, finger hovering over the ‘Rehome’ button of the Battersea Dogs’ and Cats’ home website. We kept saying that we would do it as soon as the place was finished.

It turns out that the place is never finished. Technically, we completed the last of the renovation work this month, two years after moving in.

Nevertheless, once we felt that living conditions for a cat were adequate, we had another look at the Battersea website and stumbled upon a 12 year old mini-tiger with a ‘unique’ personality (we were warned that you would not be visiting for a cuddle; that she was not a lap cat). The lure of her heart-breakingly beautiful split face markings was too great.

Ignoring the obvious warning signs, we scheduled a day to visit Kisse (we pronounce it “Kiss-eeee”, although her previous owners were Swedish, so this may be wrong. I mostly call her “cat” or “floofie” nowadays anyway.). Kisse, we were told, had lived in a household with a four year old child. She hid during the day and came out at night, to tentatively snuggle her owners on the sofa, once the child was out of sight.

This hinted at Kisse being of a sensitive constitution, shying away from noises, sudden movement and changes in her environment. A bit feral, say.

On the day of our visit, we were allowed to go into her little plexi-glass compartment (these bright spaces line the walls at Battersea, giving each cat around 2 square metres of room, which, all things considered, felt like a good temporary home). Using Dreamies, we bribed her over for a sniff of our fingers, and were even allowed to gently stroke her, which she welcomed with her signature half-silent meow.

We could have taken her there and then, but we were waited until the next day so we could prepare the house a little. Battersea provide some basics, like a few cartons of cat food, treats, her favourite toy, immunisation records, chip records and a final vet checkup on-site, where we were told anything we needed to know about our cat. This included things like her almost complete lack of teeth. Kisse’s flea and worming treatment was due that day, so foolishly we agreed to give it to her when we got her home (more on that later!).

Kisse wasn’t a happy bunny in her cat carrier and made heart-wrenching noises for the whole car journey home. She also left us a nice poo present in her carrier, which is a common display of stress in cats. They can also vomit and get diarrhoea from stress alone, but luckily that was all avoided.

Initially Kisse’s new home was our office. We intentionally chose it as it is the smallest room in the flat and hopefully the least overwhelming for her. We had been told that it could take weeks before she would venture past the room she was confined in and we were told to be very patient with her at first. It was interesting to see how brazenly Kisse explored the office almost right away. Despite her favourite hiding place (a fluffy tent-like igloo, barely bigger than her) being available to hide in, she sniffed around the whole room first, mewed at us a few times and scoped out her surroundings. Unfortunately she wasn’t so happy at the prospect of the flea and worming treatment and it was then that we discovered Kisse’s passion for hissing. She is quick to notice a slight change in body language or your approach, and certainly lets you know she’s not happy about it!

It must have only been a few days before she ventured through the open office door and found her customary spot on the sofa, and hiding place beneath the coffee table. Within another few days she had explored the whole flat, rubbed every surface thoroughly with her face, and made it all her own. Marking their environment lowers cats’ stress levels dramatically, which almost immediately improves their confidence and health. 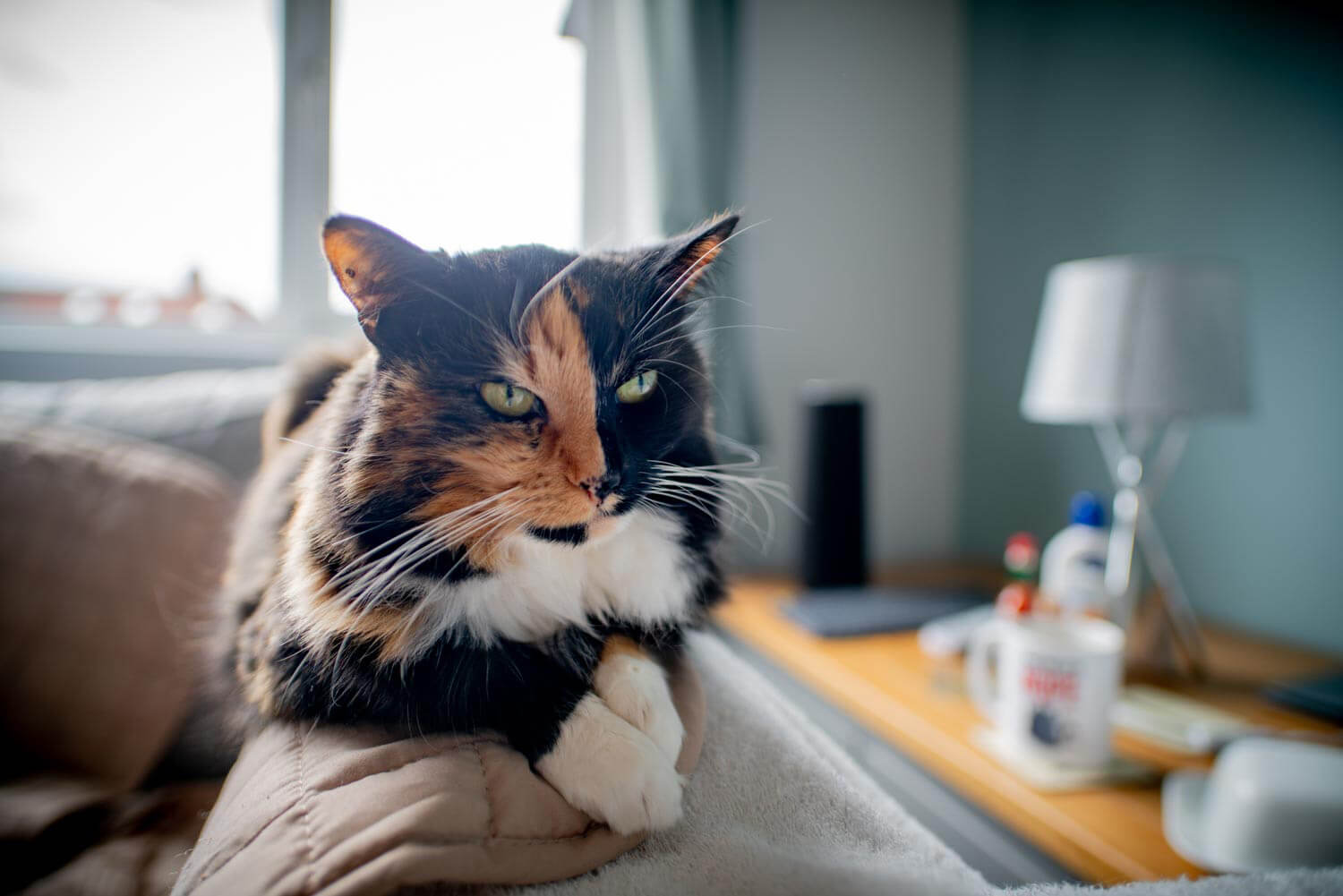 Here she is, about four weeks in, sitting on the sofa. You can see the terrifyingly ugly brown cover we had to buy to stop her scratching / kneading our new sofas to bits. Claire has since made covers to match the room, she’ll be posting about them in her own words soon.

She can be a troublesome little floof, but she is very certainly part of the family already!